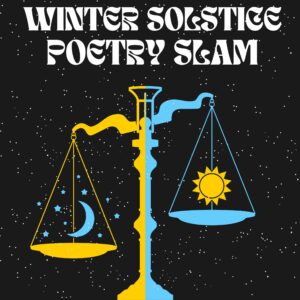 Share the long night and poetry together in this competitive open mic event. Come to SLAM, to listen, or share during the end of evening open mic. All are welcome. Wednesday December 21, 6:00 to 8:00 pm.

Winter solstice is a significant time of year in many cultures. Marking the coldest and darkest part of winter, it’s a time when people come together for festivals and celebrations. This year at PRPL, it’s a time for reflection and poetry!

To compete: Bring 3 poems that surround the theme of Winter Solstice. All regular SLAM rules apply. 3-minute limit per poem.

SLAM is a spoken word competition where the brave, bright and loud get on stage to share their words in front of a hollering, cheering, supportive crowd. At the end of the evening a poet is acclaimed as winner and are immortalized in name on the one and only SLAM medallion. The top 3 poets go home with a prize! AND there are door prizes for just coming out!

All ages are welcome, all skill levels are encouraged. Come compete or come enjoy. Everyone is welcome. Be there!

Details for competing performers: A SLAM is carried out in a series of rounds. How many rounds we have will depend on how many people participate up to a maximum of 12 poets. If you want to perform, have at least three poems ready that are under three minutes each. You are docked points over three minutes. Poems do NOT have to be memorized, but it is encouraged.

Ensure your spot in the SLAM spotlight and register now to compete using the ONLINE FORM.

The SLAM  emcee is Amira Abouelalla!

In her down time, Amira enjoys travelling, reading, writing, kayaking, and cycling and runs a Poetry Circle at PRPL.